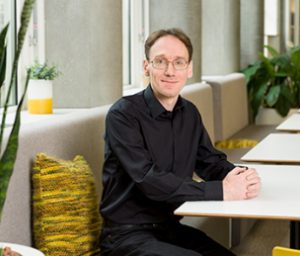 Simon E. Fisher is director of the Max Planck Institute for Psycholinguistics and Professor of Language and Genetics at the Donders Institute for Brain, Cognition and Behaviour in Nijmegen, the Netherlands. Simon obtained his Natural Sciences degree at Trinity Hall, Cambridge University, UK followed by a DPhil at the Genetics Unit of the Biochemistry Department, Oxford University. For his postdoctoral research he joined Prof. Anthony Monaco’s group at the Wellcome Trust Centre for Human Genetics (WTCHG) in Oxford, and worked on identifying genetic factors that contribute to developmental disorders such as dyslexia and speech and language impairments. During this time he and his colleagues discovered FOXP2, the first case of a gene mutated in speech and language impairment. In 2002, Simon was awarded with a Royal Society Research Fellowship and became head of his own laboratory at the WTCHG, where he used state-of-the-art methods to uncover how language-related genes influence the brain. From 2007-10 Simon was also the Isobel Laing Fellow in Biomedical Sciences at Oriel College, Oxford, where he taught Biochemistry and Medical Genetics. In 2010 he was appointed director of a new department specifically devoted to “Language and Genetics” at the Max Planck Institute in Nijmegen.

Simon is working in collaboration with the Autism Research Centre to identify and characterise genes that may make people more susceptible to developing synaesthesia.